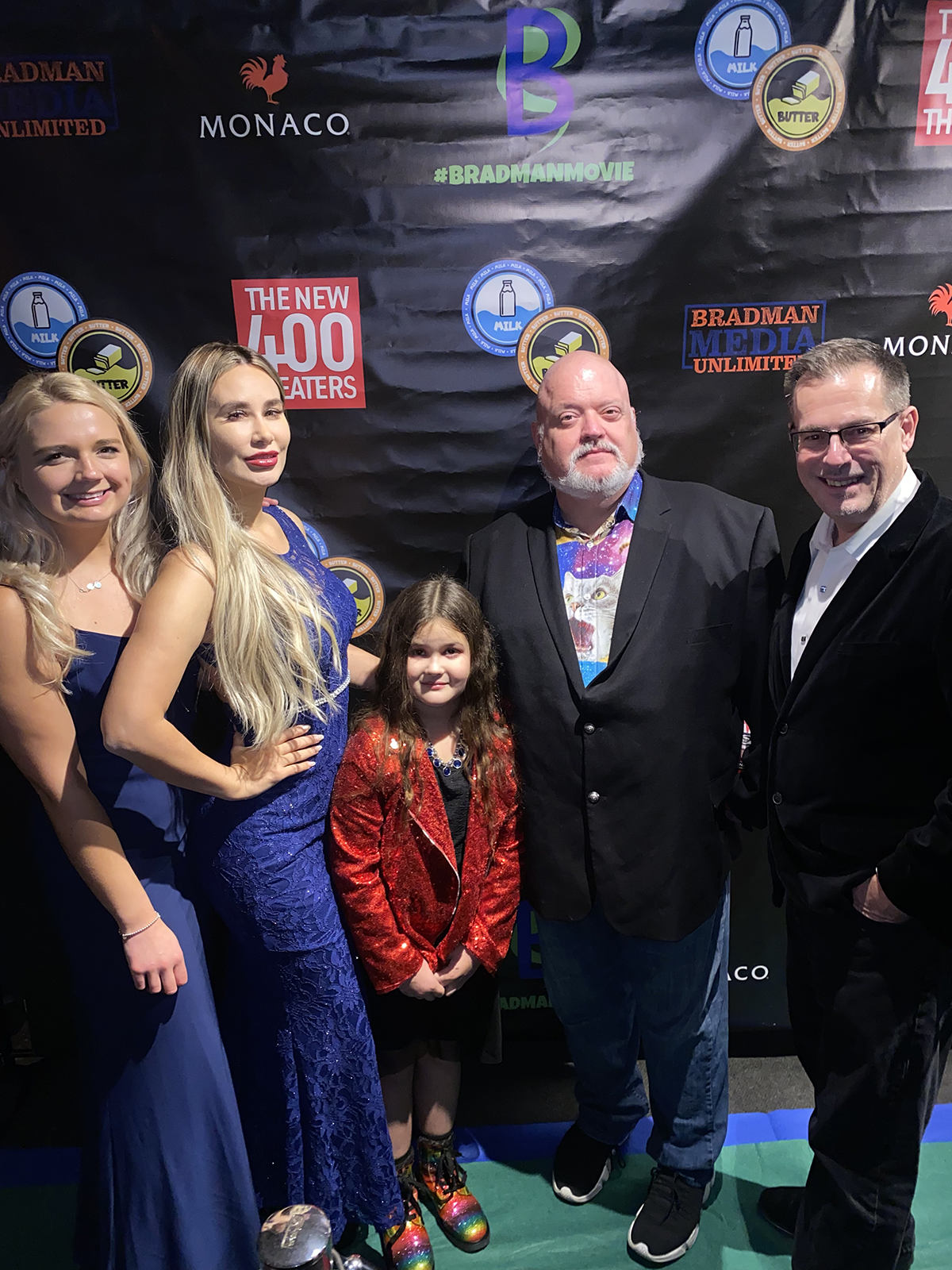 Blue Carpet event in Chicago at the historic “New 400 Theater” in the Chicago neighborhood of Rogers Park.

Chicago, Illinois Nov 15, 2022 (Issuewire.com) – The historic New 400 Theater in Rogers Park of Chicago, Illinois played the host for the recent Premiere of “Blue Carpet” screening of BRADMAN: The Movie. Several members of the cast and crew as well as notable Chicagoans stepped out to enjoy a night of fun and entertainment as well as have a chance to see a first screening of the movie itself.

Those in attendance included:

Bradley Laborman, Writer, and lead actor in the film plays the main character of Bradley/Bradman.

Ruth Diaz, is the actress who portrays one of the film’s two main villains, Disco Infuerno.

Jeremy Applebaum, who was the Director of Photography for the film and is also a producer on the project.

Abby Specht, a local Chicago musician and composer of the song “Hero” from the BRADMAN: The Movie Soundtrack was in attendance along with Caitie Ramirez who performed vocals on the song.

Mike Leibrandt, who wrote and performed the song “Drive” on the soundtrack was in attendance as well.

Various members of the Chicago and surrounding communities were on hand for the event as well.

Angelica Trygar, who plays the alien being “Kyla” stated, “It was such an honor to be a part of this project. Kyla was a blast to bring to life on screen. I couldn’t ask for a better scene partner than Dennis Hurley.”

Dennis Hurley, who portrayed “Professor Victor Nordic” was unable to attend the event due to previous filming commitments, but stated in a message, “An absolute joy to play Professor Nordic in the zany comedy feature, Bradman! Always a pleasure to work with Bradley Laborman”

The evening was sponsored by milkandbutter.net, gaming, charity, and the Crypto community, and drinks were provided by Monaco.

After the film, several of the actors were excited about the film and already inquired about a possible sequel.

“Such a funny and great movie! I laughed a lot! I sure hope Bradman is going to have a sequel!” said Delilah Hefner, a young, up-and-coming actress who has a pivotal role in the film.

TJ McDonald, a Chicago-based actor stated, “BRADMAN: The Movie was my first role in a feature film. I didn’t know how things would work but it was a wonderful experience and I’m happy I got to be a part of it.”

Jenny Wardach gushed over her filming experience, “The cast and crew sure made the experience a comedy. I wouldn’t change a thing.”

When we were able to catch up with Bradley Laborman, who was enjoying all the buzz from the premiere, he told us “I made this movie to pay homage to the first movie I ever wrote and created in college, the original movie was a steppingstone that has provided me with over 20 years of experiences in films, television, and live theatre. This movie is the reason for where I am today and this reboot, this cast, and crew, provided the perfect chemistry to bring it back to the screen.”

We also had a chance to reach out to Barry Keith Coe Jr., who acted as one of the producers on the film but was unable to attend the Chicago-based premiere. “I wish I could have been there, being involved in independent film projects like BRADMAN are important for me as a comedian and entertainer. Projects like these provide a voice we don’t always get to hear. However, I was visiting my little sister in Atlanta to support her in bringing a new edition to our family. I am an uncle now and my nephew is a ball of light!”

BRADMAN: The Movie has a few more possible screenings scheduled for Los Angeles and NYC, as well as again in Chicago in December before it goes to streaming platforms around December 15, 2022.

A Plot summary of the film is:

Bradley is a middle-aged man who gave up a normal 9-5 job to try to pursue comedy. Now he works as a rideshare driver while performing nights at The Chuck Hole Comedy Club in Albany Park, a neighborhood in Chicago.

His love interest is Jeannie, a bartender at the comedy club who is studying to get her master’s degree at a local university. After some back and forth they finally agree to have a date one night after Jeannie gets off work. The powers that be however have other plans for Bradley.

Through a series of events, Bradley consumes an alien elixir that grants him superpowers.

Now Bradley finds himself as the superhero “Bradman” protecting the city he calls home and the woman he loves from two evil supervillains determined to destroy the world.

You can learn more about the movie by visiting the website BradmanTheMovie.com or checking out the IMDb Page for the film.

Photo 5, Writer, and Creator, Bradley Laborman, who also portrays the title hero in BRADMAN: The Movie, attends the Chicago Premiere. 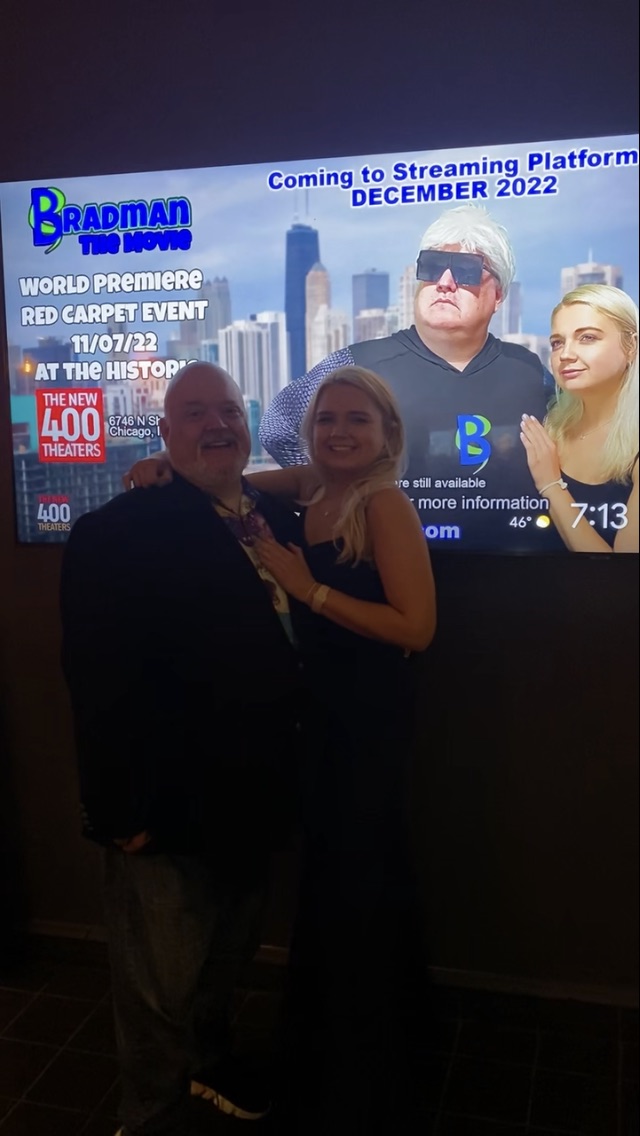 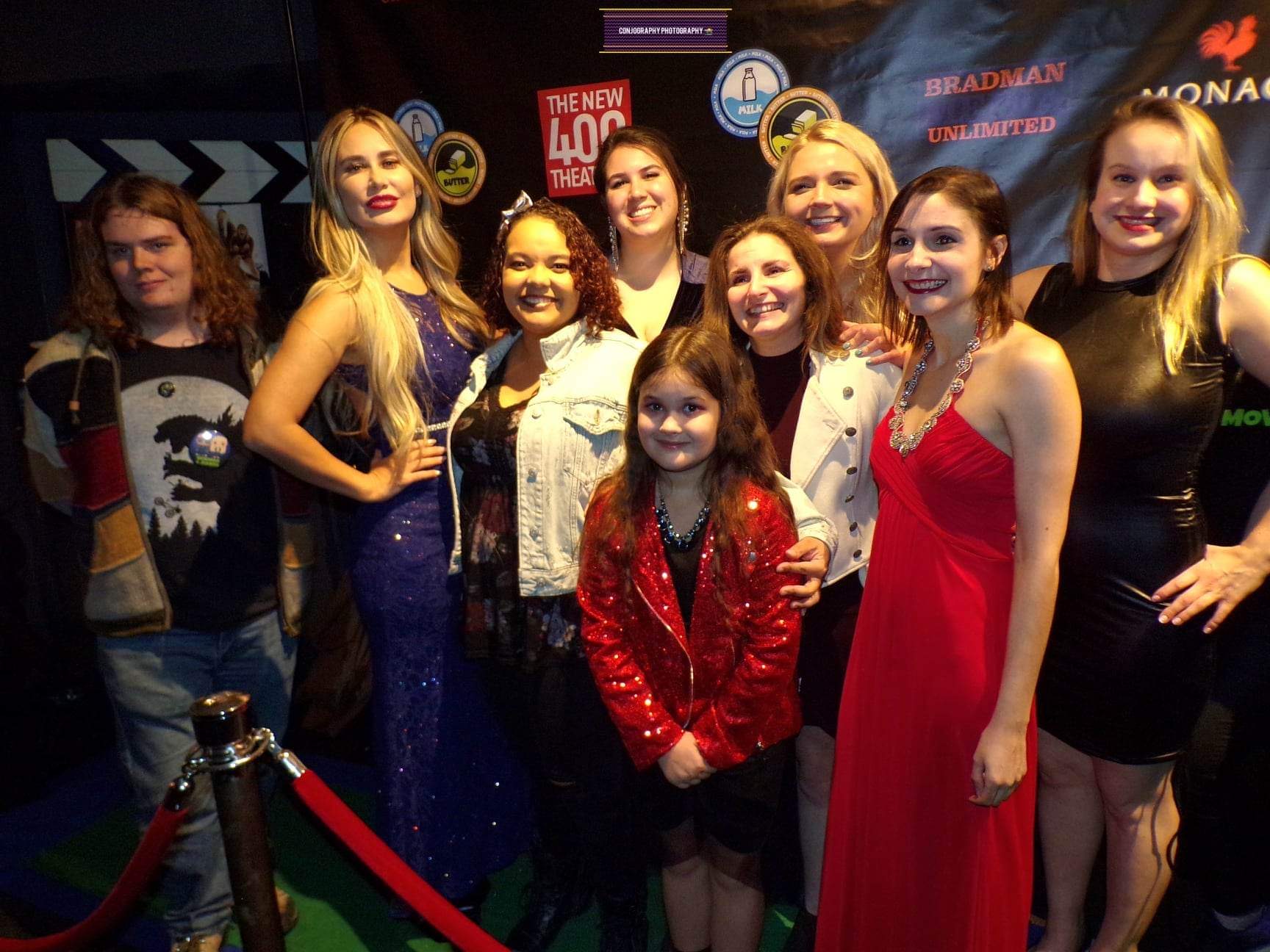 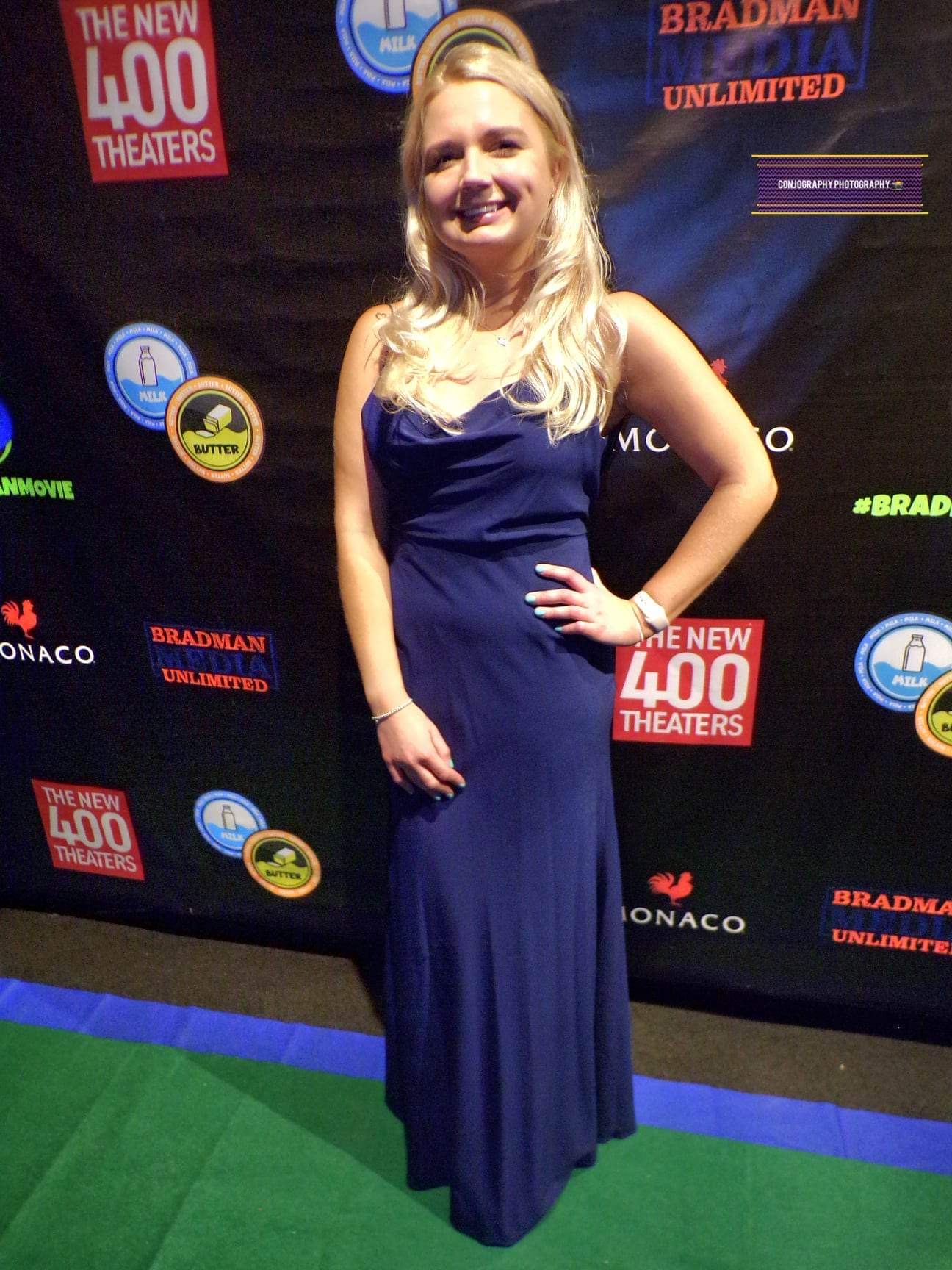 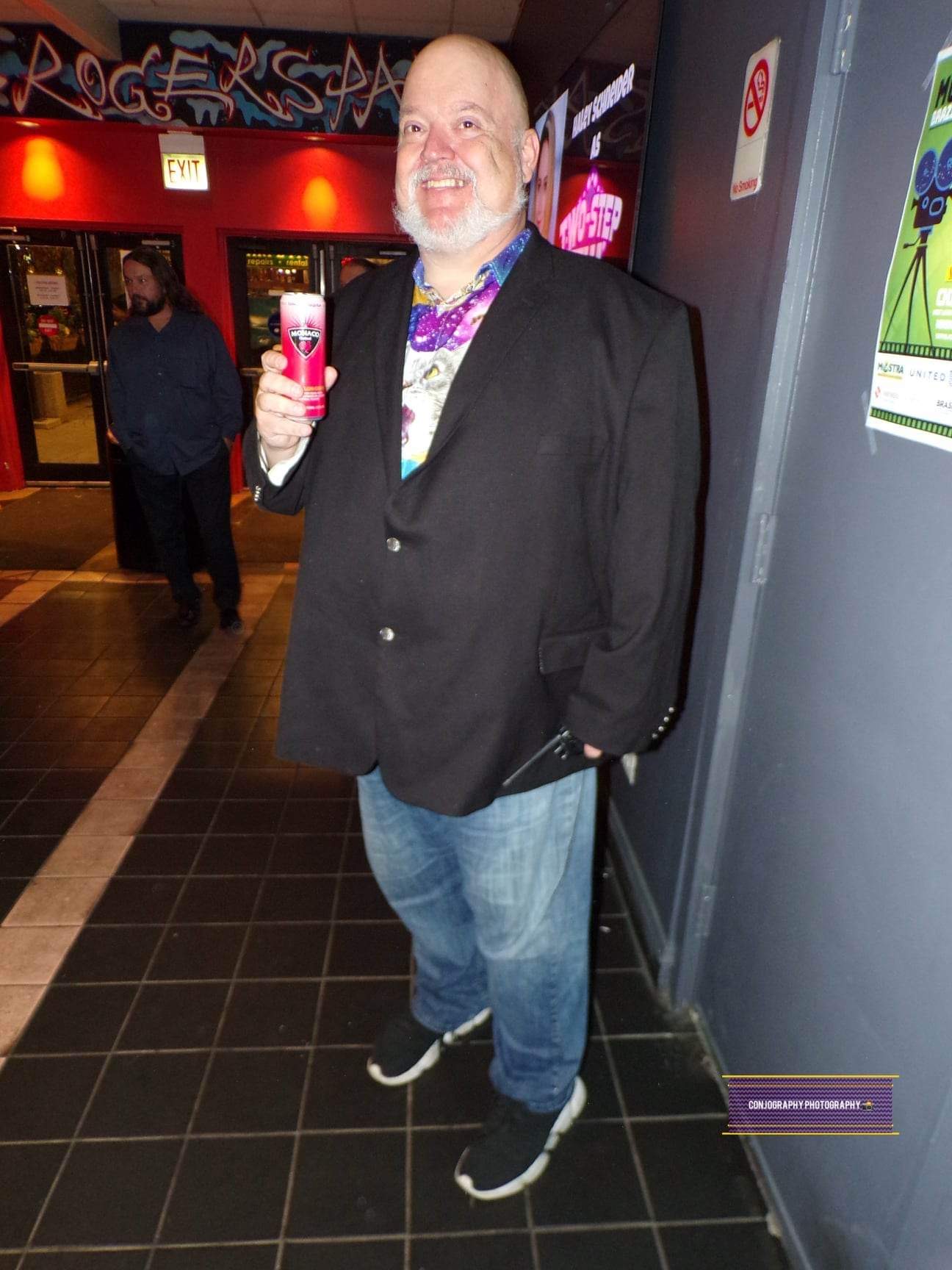